Situated just seventeen kilometres from the north of France with a population of just over 2,000 people, the 8 square kilometre island of Alderney is the hidden gem of the Channel Islands. Third largest of the Channel Islands, the history and culture that can be found on the small island of Alderney surprises the majority of tourists that visit its dramatic, cliff shores.

Explore the beauty of Alderney and fall in love with this magical island with this three day itinerary, showcasing the best that the island has to offer from its fascinating history to its best sunset locations.

Day One - Explore the Town of St Anne

After you arrive at your hotel, bags checked and room ready, set off on foot to explore the town centre of St Anne, Alderney’s largest dwelling. The streets here consist of charming, narrow lanes made of cobbled stone and lined with local stores and delicious restaurants. 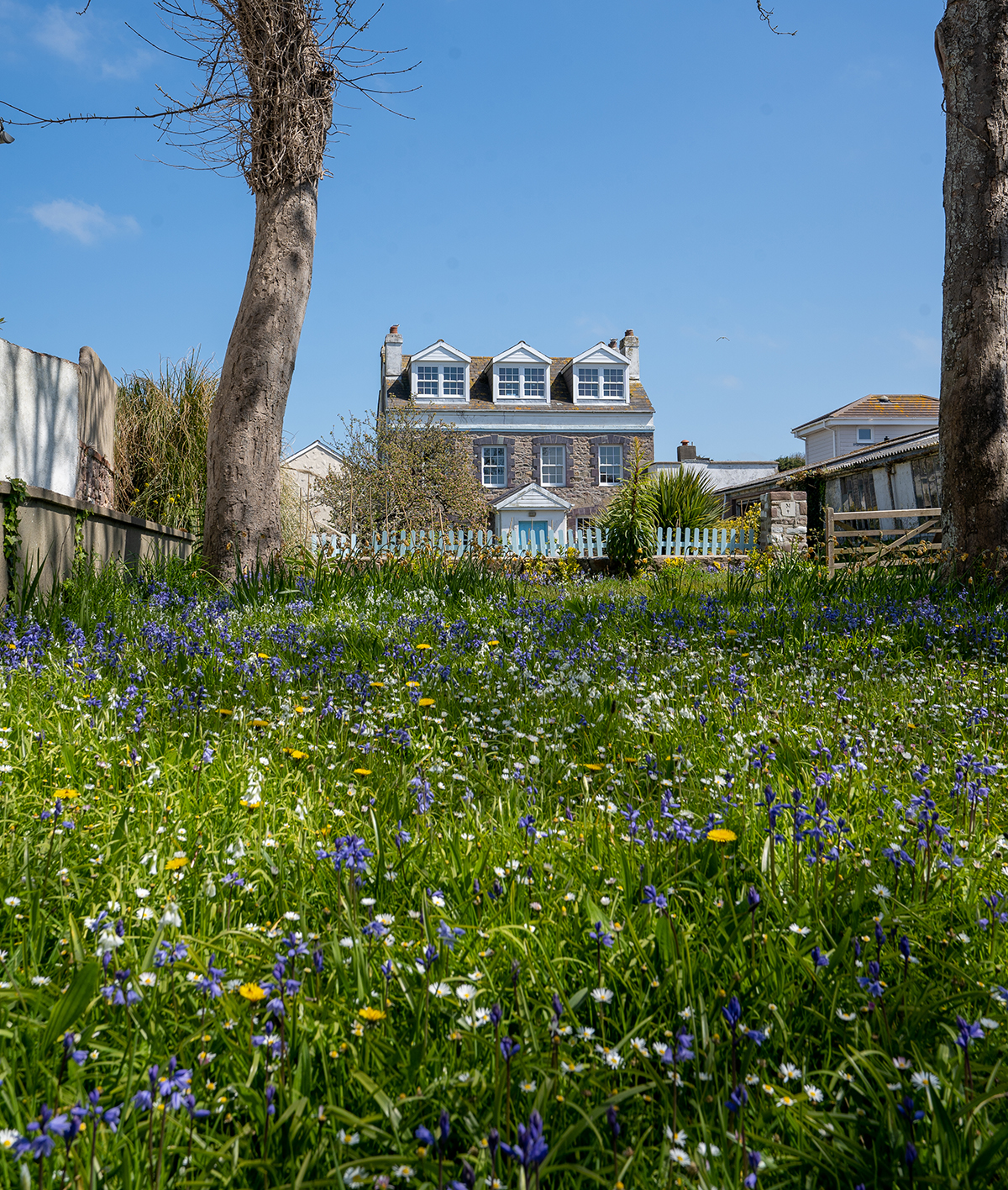 As you make your way along the main street, admire the beautiful spire of the local church, listen out for the local bell-ringing group practicing high in the tower, and pay a visit to the Alderney History Museum.

One of Alderney’s most fascinating attractions is the Alderney Museum, a locally run museum showcasing the deep history of Alderney and the surrounding area of the Channel Islands. Pay a visit to this museum and learn about this tiny island’s turbulent past, from the arrival of the Romans to its destruction throughout World War II. 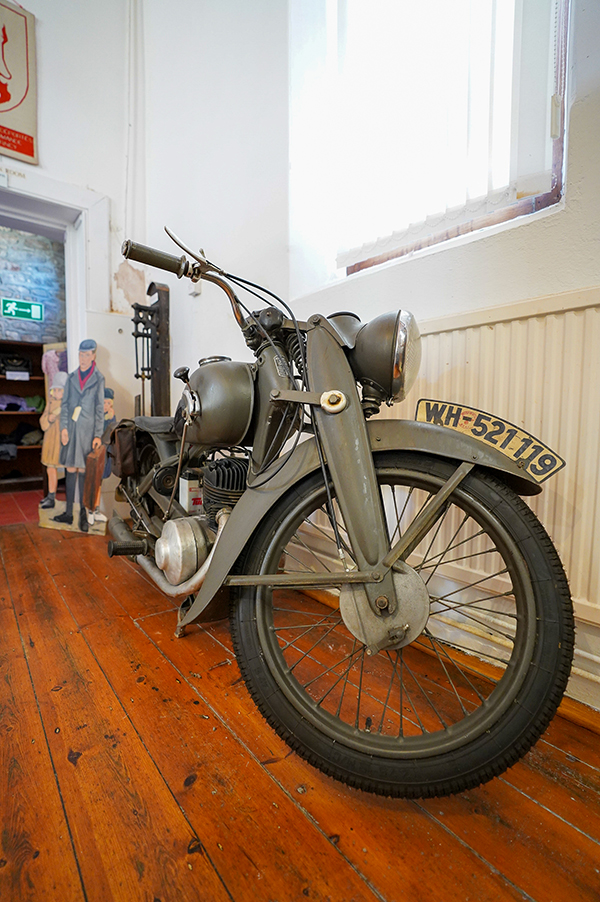 Spend the morning exploring the museum and chatting to the friendly guides who run the exhibition before you head back to your hotel to get ready for a starlight tour to remember.

Night Tour with the Wildlife Trust

As dusk creeps over the island and the stars begin to twinkle above your head, head out into the night to embark on possibly one of the most unique activities you will find in the Channel Islands: the Bat and Hedgehog Tour with the Alderney Wildlife Trust. 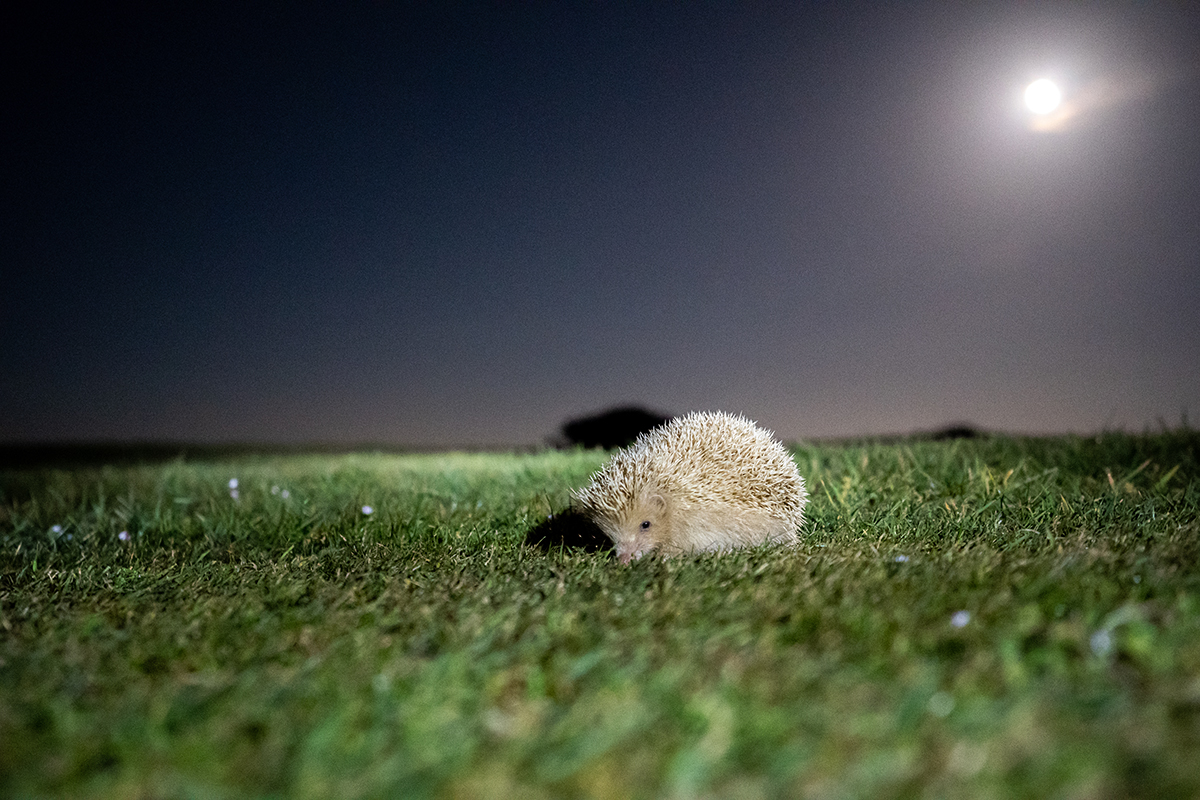 It is believed that this monopoly has come about over the years due to the lack of predators found on the island that would find this mutation of hedgehog easy prey, combined with how easy they are to spot (and therefore avoid) when driving around Alderney. Nevertheless, the Bat and Hedgehog Tour will take you on an expedition across the island on the hunt for these creatures of the night, as well as the common pipistrelle, Alderney’s most common bat species.

The Alderney Wildlife Trust tour guide will show you the most common places to see these beautiful and fascinating creatures of the night, as well give an insight into how they behave, feed, and communicate in the pitch dark. Rent one of the bat detector kits and listen out for the clicks that these translators emit when a bat is communicating with one of its kin.

This tour is one of the highlights of our trip to Alderney and is certainly not to be missed.

Day Two - The History of Alderney

Start off the next day with a quick dip at Alderney’s most breathtaking beaches, Braye Beach. This golden sand beach stretches one kilometre along the northern coast of the island and is guarded by the hugely impressive breakwater that spans the mouth of the bay.

When you are done with your swim, heat up in the Braye Beach Hotel cafe and enjoy the view of the breakwater, an everlasting testament to the incredible importance of this small island over the centuries. 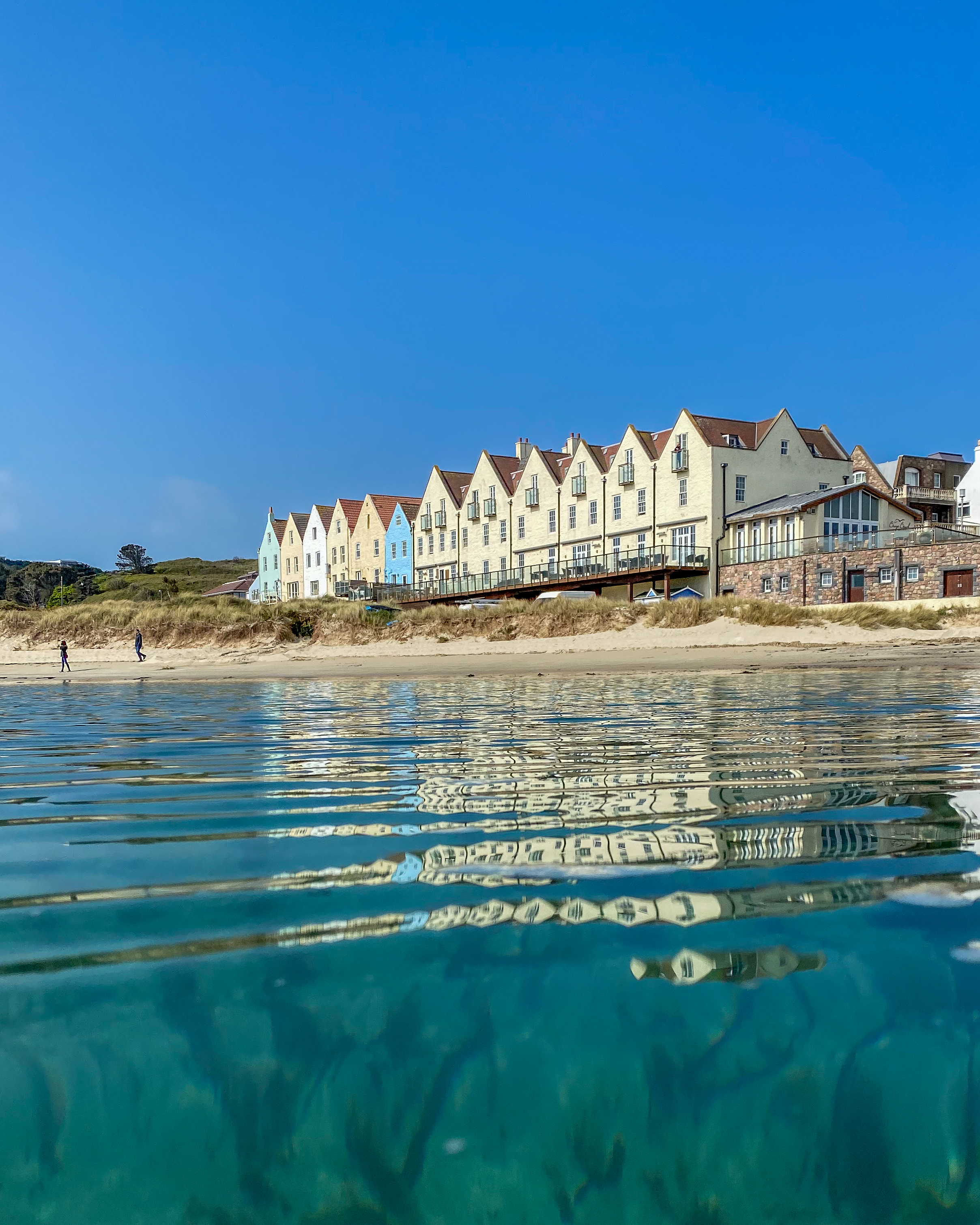 History Tour of the Island

As you gaze out to the end of the 800m concrete structure of the Alderney breakwater, consider the reason this spectacular monolith was constructed at the end of the 19th century. Marked as one of the most influential projects in the world, this feat of engineering was designed to protect Braye Harbour from storms of the open ocean.

The fact that such a project was undertaken on such a small small island highlights the historical importance that the island of Alderney played over the years. Marked as a key strategic location for the British Empire in the event of an invasion by France. As a result, the island was covered by 18 forts and batteries during the 19th century, most of which can still be found across the island today. 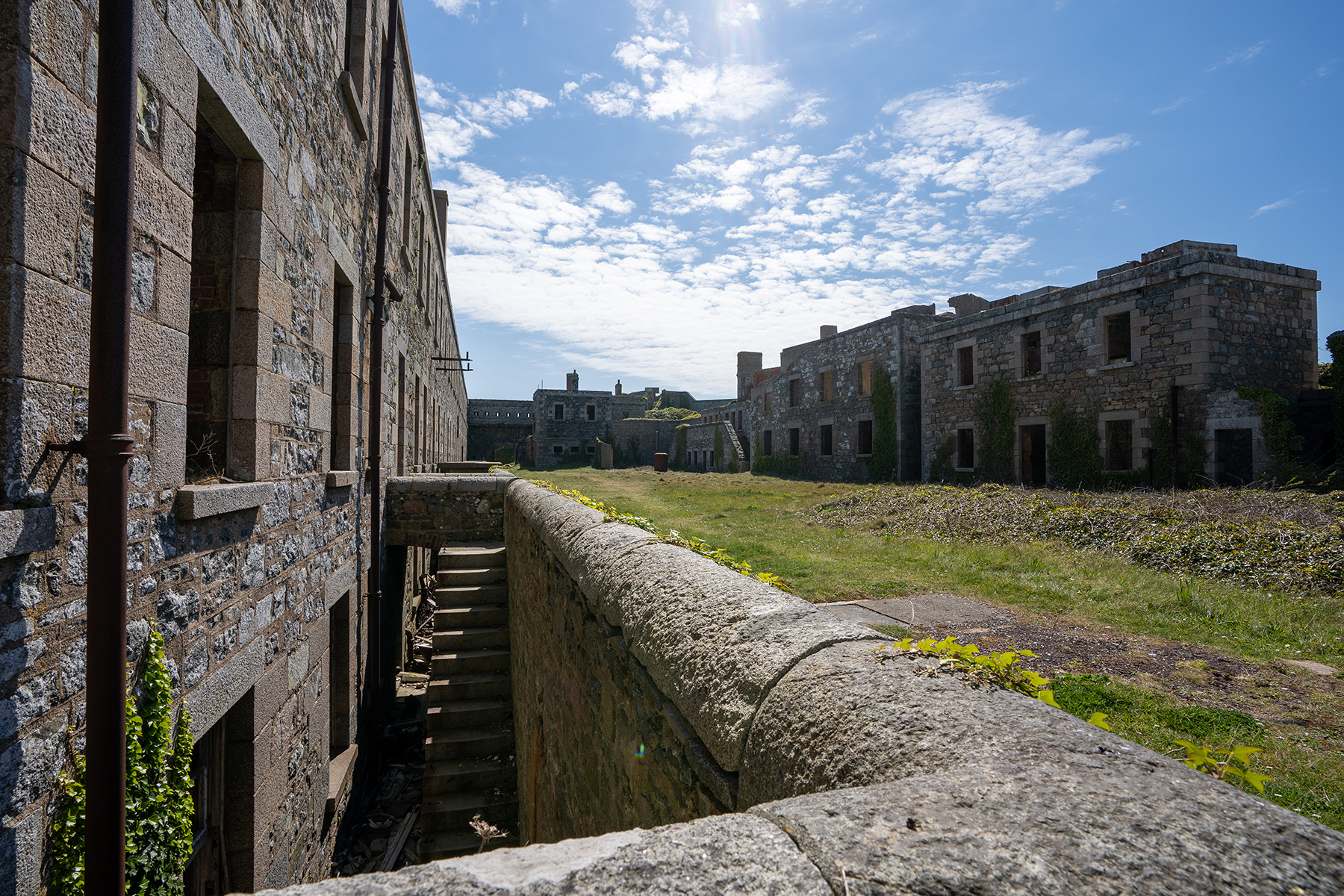 The strategic importance of this island as a means of guarding the English Channel is reflected by the other number of forces that have created fortifications throughout the centuries. From the Romans to the Nazis, this island has acted as a military fortress for some of histories most significant invaders and conquerors. 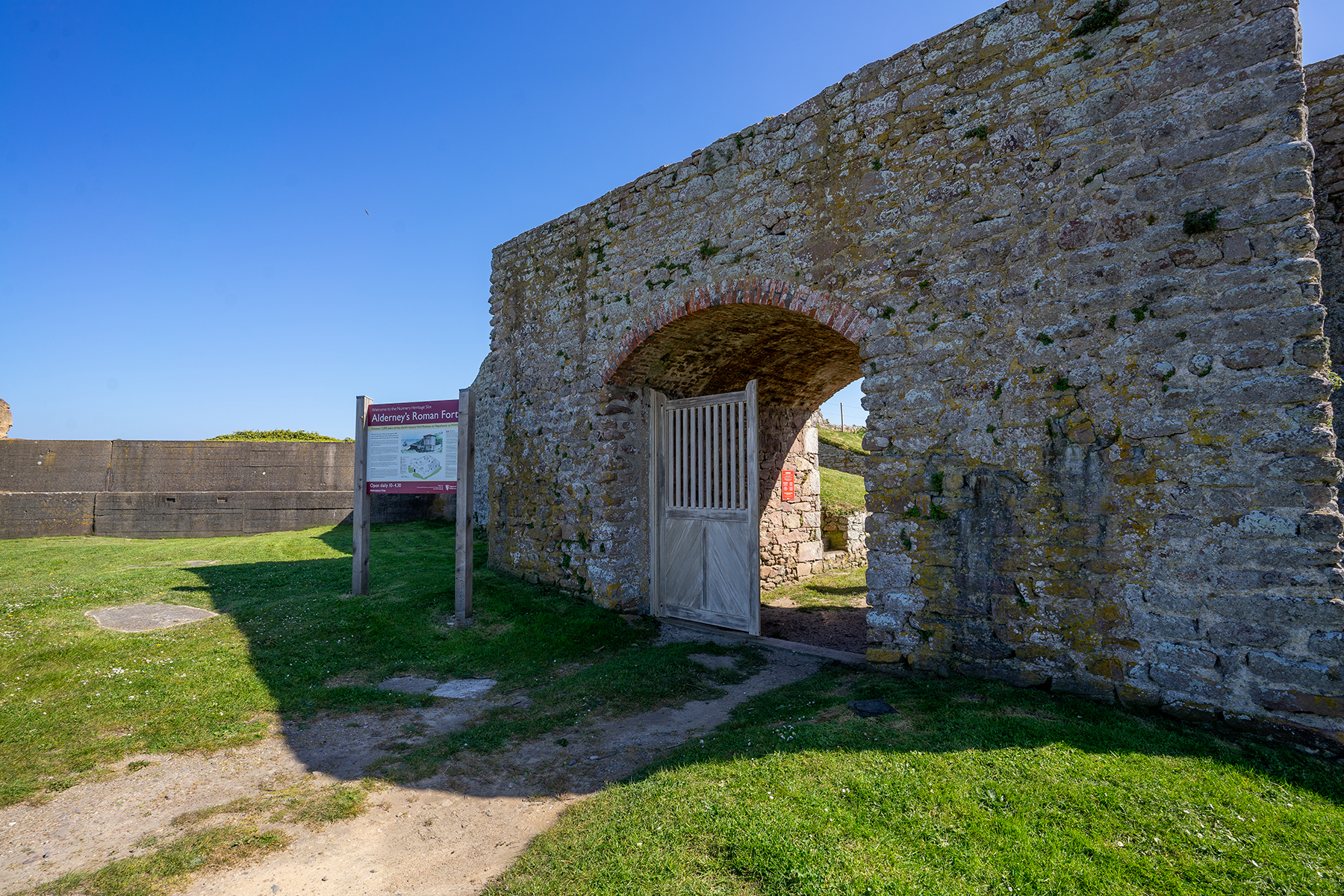 If the idea of exploring the ancient ruins of a fortress interests you then three areas of Alderney that are especially noteworthy are the Roman Fort on the eastern coast, Fort Tourgis on the west, and the Bibette Head bunkers. The Roman Fort is the remains of an ancient fort built 2000 years ago and Fort Tourgis is the remains of an enormous Victorian fortress that was later fortified by the Germans. Bibette Head is an area of Alderney that is full of hidden bunkers that were built into the side of the rocky coastline and are still accessible today. 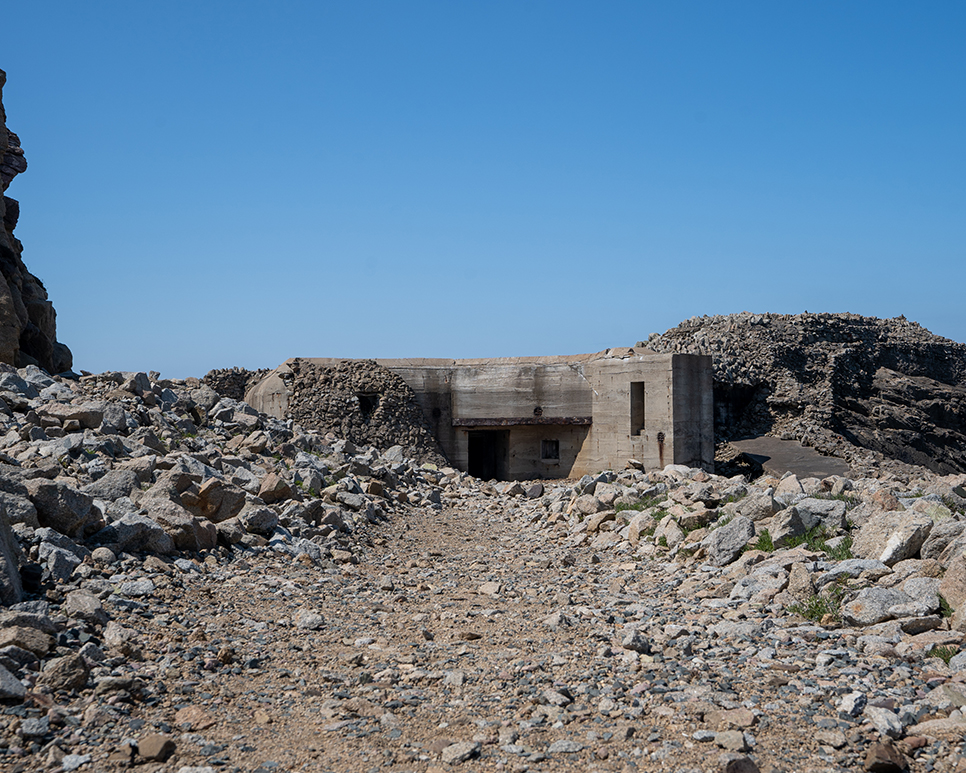 Finish your day of exploring Aldnerney’s rich history with a stunning sunset over the remains of the Victorian fortress known as Fort Clonque. If you park up beneath Fort Tourgis, you can walk along the gravel path to the viewpoint over the fortress. From here you can enjoy the stunning view of Fort Clonque as it is illuminated by the golden light of the sun as it sets in the west. 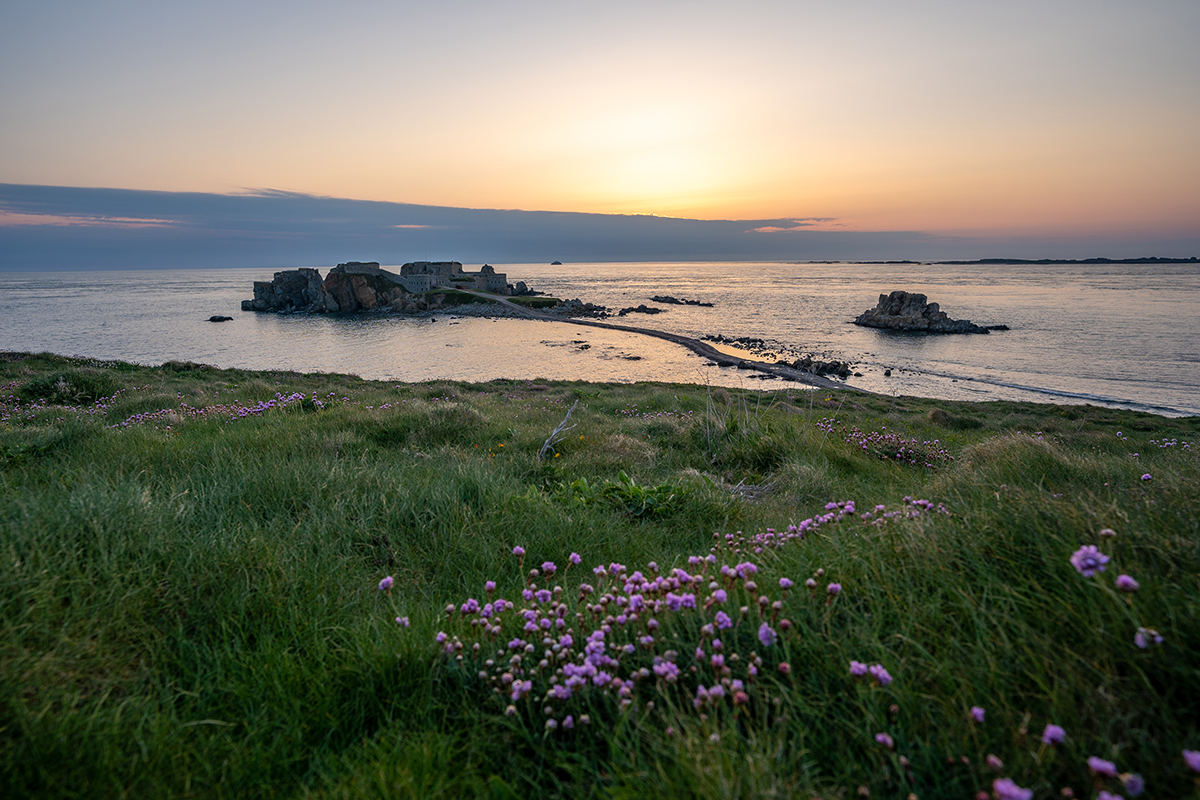 Boat Tour with the Wildlife Trust

When you are well-rested and ready for your final day on Alderney, pack a raincoat, warm clothes, some snacks and drinks, and make your way back to Braye Harbour. From here you will depart on the Alderney Wildlife Trust (AWT) boat tour, which is a fantastic tour of the island’s coastline and surroundings. 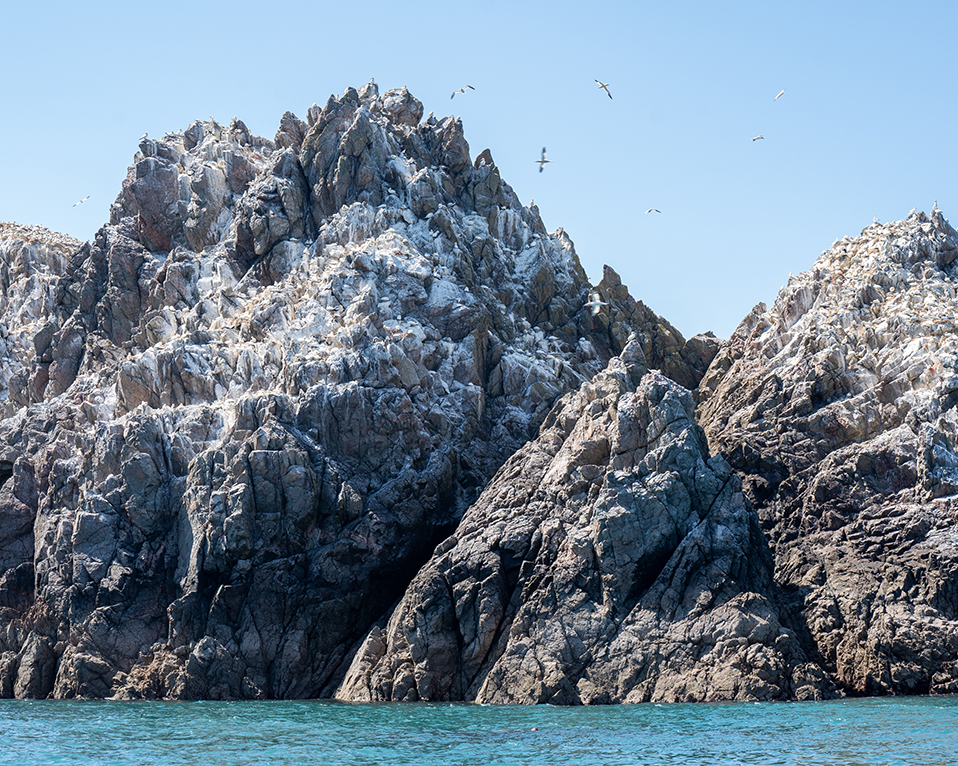 On this tour, you will be given a thorough background on Alderney’s importance to sea life and birds as a key nesting spot in Europe. The expert guides aboard the AWT’s research vessel will assist you as you tour the various smaller islands that surround Alderney’s western coast, such as Les Etacs which is home to over 6,000 pairs of gannets. You will also pay a visit to the northern island of Burhou where you can find puffins and even seals. 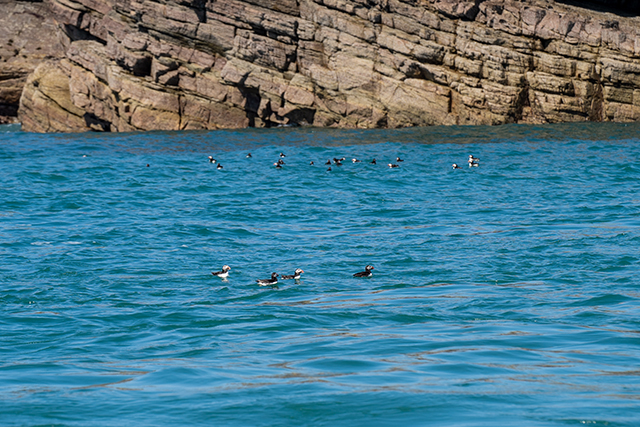 As you cruise between the islands with the friendly and helpful Wildlife Trust staff, soak up the noise of the thousands of gannets that circle above your head, and keep an eye out for the tiny puffins as they paddle off the shore. This was another highlight of our trip to Alderney and we would recommend it to anyone. 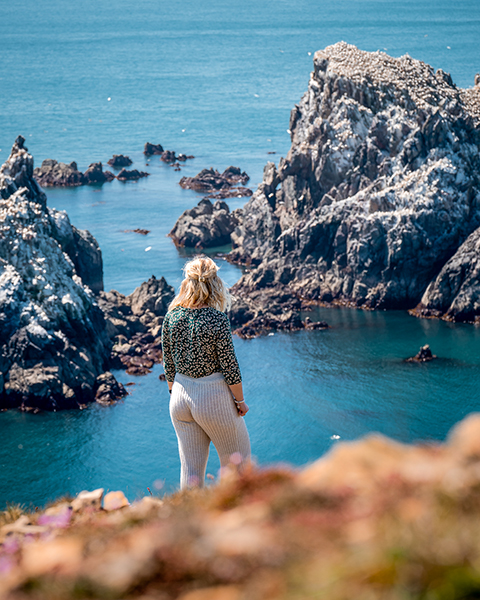 To finish off your trip, it is time to admire the gannet colony from a different angle. Head to the western-most edge of the mainland of Alderney in time for sunset with a picnic blanket and a pair of binoculars (which you can rent from the AWT centre in St Anne).

Cosy in at the edge of the cliff and get ready for a sunset that is going to stick with you forever as your final day on Alderney draws to an end. No matter where you go after this trip, you can always take solace in the knowledge that Alderney will always be right here waiting to welcome you back once again.

Where to Eat in Alderney

There are so many delicious and unique places to eat in Alderney that you will struggle to enjoy them all during your time on the island. No matter what your taste in food may be, you are guaranteed to find it here.

Beneath the exquisite Braye Beach Hotel lies the quirky bar and grill known as The Vault. Here you can enjoy a selection of burgers and steaks, as well as a host of hand-crafted cocktails.

Further along the road from Braye Beach Hotel, this Latin American restaurant serves up the best burritos on the island (and possibly in all of the Channel Islands). Return here once the sun has set and spend your night dancing to Latin American music in the bar that sits beneath Braye Street. 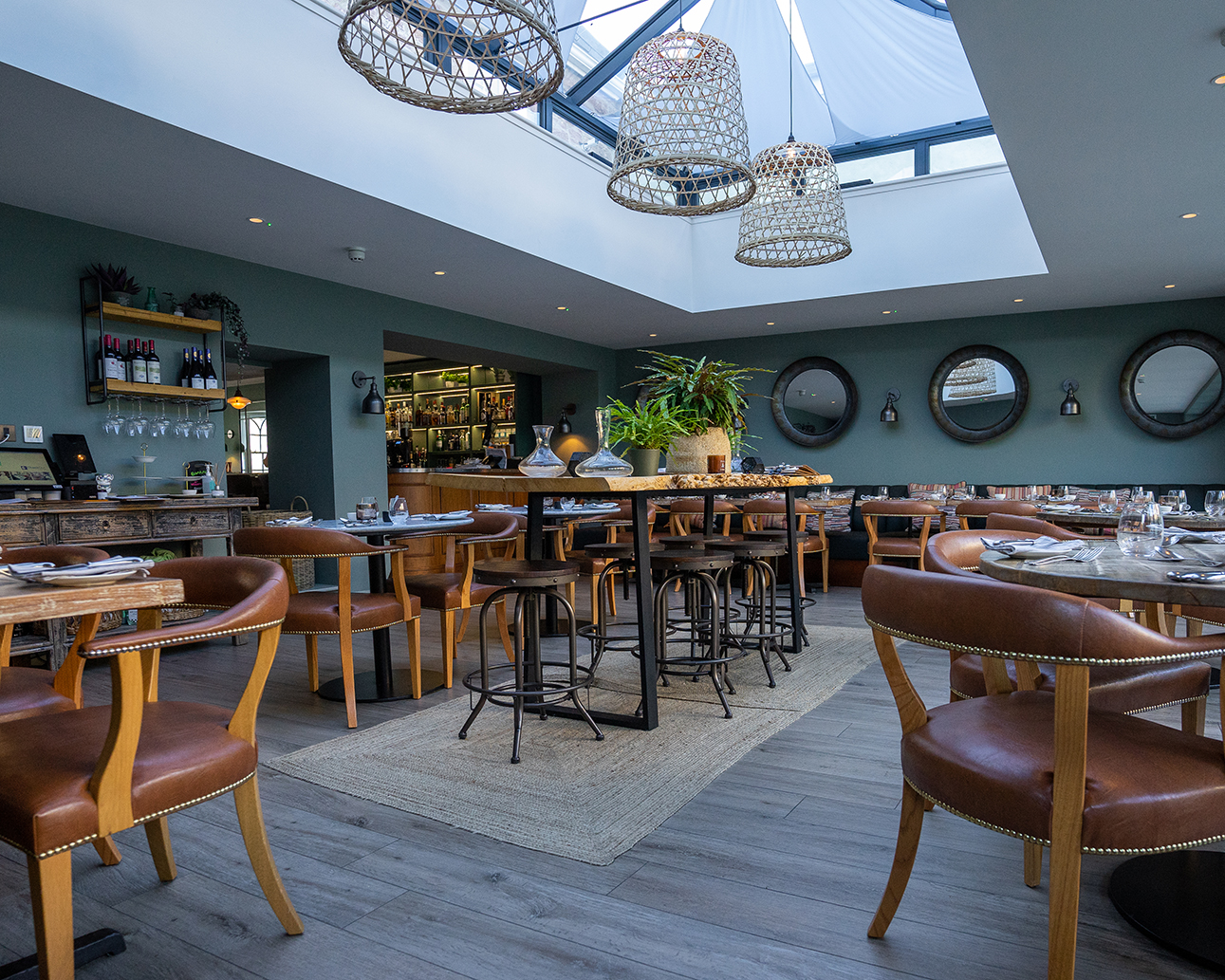 No trip to a seaside location is complete without a good old fish and chips, and what better location is there than the beautiful Braye Beach. Grab a bag of chips and the fresh fish of the day and settle into golden sands to enjoy the sunset with some al fresco dining.

A family-owned hotel situated on the high street of St Anne, the Georgian House is a favourite in the heart of Alderney. Here you can enjoy anything from Cream Tea to a relaxed pint of ale, and of course a delicious dinner in the upstairs conservatory. The portions are also huge, so make sure you come here hungry!